The Office of the Police and Crime Commissioner for Surrey has won a prestigious national award for the quality of its independent custody visiting scheme.

The inaugural Independent Custody Visiting Association (ICVA) Quality Assurance awards were presented at a ceremony at the House of Lords on Wednesday 15 May.

Volunteers make unannounced visits to police custody to check on the rights, entitlements, well-being and dignity of detainees held in police custody, reporting their findings to Police and Crime Commissioners and Police Authorities who in turn hold Chief Constables to account.

The Quality Assurance awards were introduced by ICVA to help schemes:

There were four graded levels of award:

Within each level, there were more than 25 set of criteria covering key areas such as holding the force to account, and requiring evidence to support each assessment. For Silver and Gold levels, schemes had to get their submissions peer assessed and ICVA assessed each submission for a Platinum award. 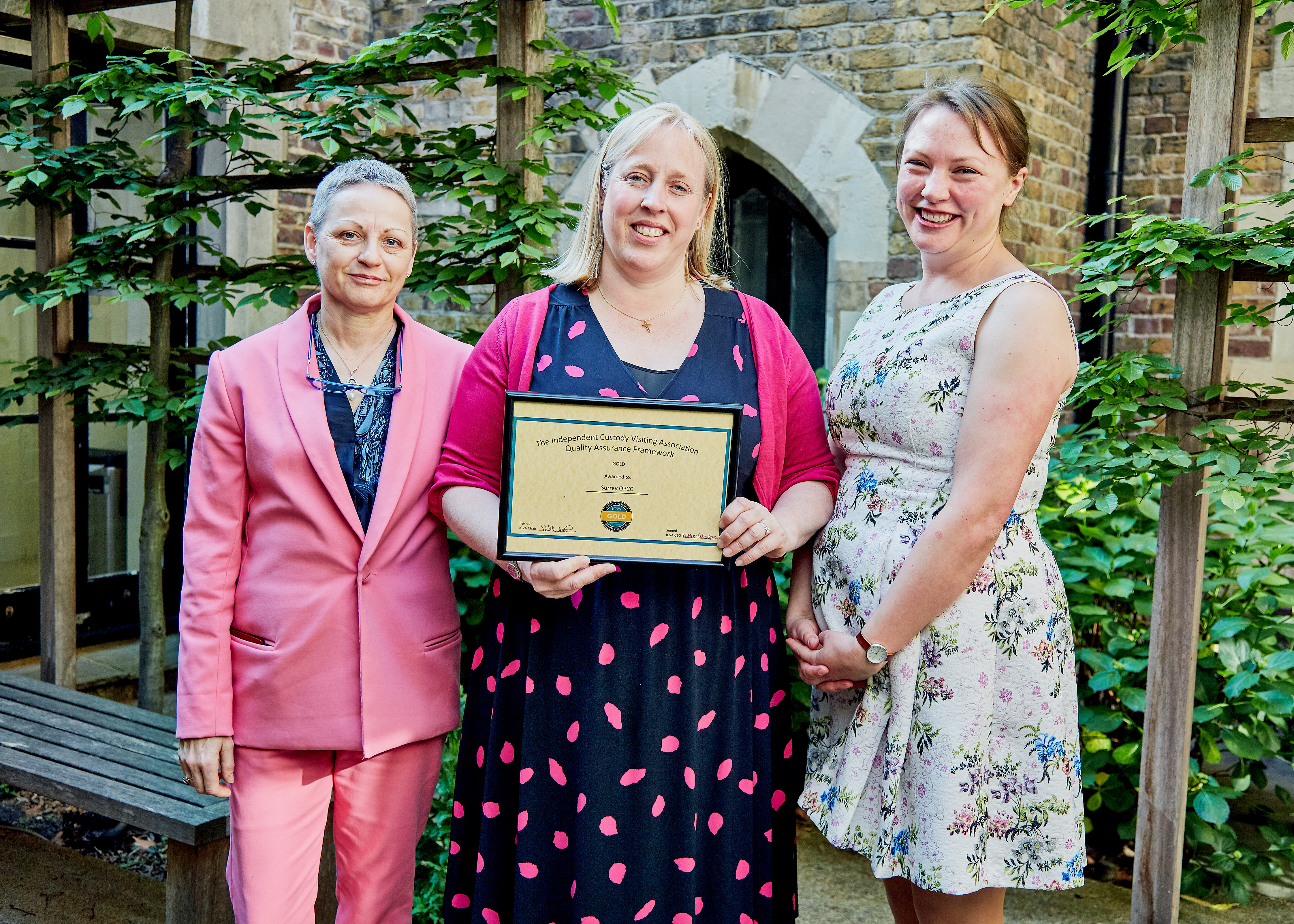 Both, Erika (Scheme Manager) and the volunteers themselves have worked exceptionally hard over the last twelve months to ensure both impartiality and that the welfare of those in custody has been met.

Martyn Underhill, Chairman of ICVA, said: “These awards recognise the standard of scheme being run in the area, and help drive up the standards of our schemes across the UK.  Warm congratulations to all of the winners.”

Katie Kempen, Chief Executive at ICVA said: “Independent custody visiting schemes ensure that the public have oversight of a high pressure and often hidden area of policing.  These awards demonstrate how local schemes use volunteer feedback to make change and ensure that police custody is safe and dignified for all.  I congratulate schemes on their accomplishments.”

If you’re interested in becoming an ICV, the OPCC is currently seeking new recruits to work in the custody suite at Salfords Police Station, near Redhill.

You must be over the age of 18 and live, study or work within the Surrey policing borders and although the posts are voluntary and unpaid, travelling expenses are reimbursed.

For further information and to get involved with ICV’s in Surrey:

By SurreyPCC|2019-05-22T12:57:57+01:00May 16th, 2019|News, News Archive|Comments Off on Office of the Police and Crime Commissioner for Surrey wins prestigious national award for custody visiting