Police and Crime Commissioner for Surrey Lisa Townsend has welcomed the launch of a consultation on a brand-new law that will enhance the support for victims in England and Wales.

Plans for the first-ever Victims’ Law aim to improve engagement with victims of crime during the criminal justice process and include new requirements to hold agencies such as the police, Crown Prosecution Service and the courts to greater account. The consultation will also ask whether to increase the role of Police and Crime Commissioners as part of providing better oversight across the criminal justice system.

The Law will amplify the voices of communities and victims of crime, including a more explicit requirement for prosecutors to meet and understand the impact of a case on the victims before making charges against offenders. The burden of crime will be focused on offenders, including an increase to the amount that they are required to pay back to the community.

The Ministry of Justice also confirmed it will go further to specifically protect the victims of sexual offences and modern slavery from re-experiencing trauma, by speeding up the national roll out of pre-recorded evidence in courts.

It follows the publication of the Government’s Rape Review earlier this year, that called for better recognition of the impact of the criminal justice system on victims.

The Government has today published the first national criminal justice system and adult rape scorecards, accompanied by a report on the progress made since the Review was published. The publication of scorecards was one of the actions included in the Review, with a focus on the whole of criminal justice system working to increase the number of rape cases reaching court and to improve support for victims.

Surrey has the lowest level of recorded cases of rape per 1000 people. Surrey Police have taken the recommendations of the Review seriously, including developing a rape improvement plan and rape improvement group, new perpetrator programme and case progression clinics.

Police and Crime Commissioner Lisa Townsend said: “I greatly welcome the proposals outlined today to improve the support that is offered to victims. Every individual affected by a crime deserves our absolute attention across the whole system to ensure they are fully heard and included in achieving justice. It is important this includes progress towards protecting more victims from further harm as a result of the impact of criminal processes such as facing an offender in court. 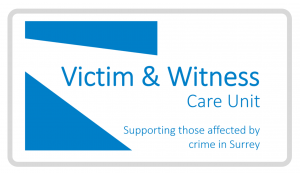 “I am pleased that the measures proposed will not only make the criminal justice system work harder to achieve better outcomes, but that it will keep a core focus on increasing the penalties for those who cause harm. As Police and Crime Commissioners we play a key role in improving the policing response as well as community support for victims. I am committed to championing the rights of victims in Surrey, and embrace every opportunity for my office, Surrey Police and partners to enhance the service we provide.”

Rachel Roberts, Department Head of the Surrey Police Victim and Witness Care Unit said: “Victim participation and victim support is essential to the delivery of criminal justice. Surrey Police welcome the implementation of a Victims Law to ensure a future where victims’ rights are a key part of how we deliver overall justice and victim treatment is of utmost priority.

“This welcome piece of legislation we hope will transform victims’ experiences of the criminal justice system, ensuring that all victims have an active role in the process, have the right to be informed, supported, feel valued and able to make informed decisions. A Victims Law is an opportunity to ensure that all victim entitlements are delivered and those agencies who are responsible for doing this can be held to account.”

The Surrey Police Victim and Witness Care Unit is funded by the Office of the Police and Crime Commissioner to provide help victims of crime cope and, as far as possible, recover from their experiences.

Victims are supported to identify sources of help for their unique situation and to develop tailored care plans that last as long as they need them – from reporting a crime, through to court and beyond. Since the start of this year, the Unit has had contact with over 40,000 individuals, providing more than 900 individuals with ongoing support.

You can contact the Victim and Witness Care Unit on 01483 639949, or for more information visit: https://victimandwitnesscare.org.uk