The Police and Crime Commissioner David Munro has said news that a potential transit site has been identified to direct travellers to in Surrey is a ‘step in the right direction’ for the county’s residents.

An area of Surrey County Council managed land in Tandridge has been earmarked as the first site in the county that could provide a temporary stopping place which could be used by the travelling community.

The PCC has long been pressing for such a site with proper facilities which have proved successful in other areas of the country. Following continued collaboration involving all borough and district councils and the county council, a location has now been identified although no planning application has been submitted. The PCC has committed £100,000 from his office to help set the transit site up.

The Commissioner said he is also eagerly awaiting the results of a government consultation after reports that the Home Office are planning to change the law to make setting up unauthorised encampments a criminal offence.

The PCC responded to the consultation last year saying he supported the criminalising the act of trespass in relation to encampments which would give police tougher and more effective powers to deal with them when they appear.

PCC David Munro said: “During my term of office I have long been saying that there is an urgent need for transit sites for travellers in Surrey so I am pleased there is hopefully some good news on the horizon with a potential location identified in the Tandridge area.

“A lot of work has been going on behind the scenes involving all local agencies to address the need for transit sites. There is obviously still a long way to go and any site will have to go through the relevant planning processes but it is a step in the right direction for Surrey residents.

“We are approaching the time of year when the county begins to see an increase in unauthorised encampments and we have already seen a few in Surrey over recent weeks.

“The majority of travellers are law-abiding but I’m afraid there are a minority that cause disruption and concern to local communities and increase the strain on police and local authority resources. 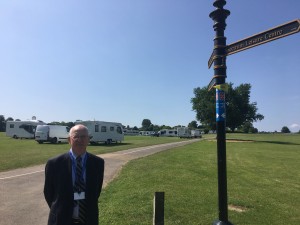 “I have visited a number of communities where unauthorised encampments have been set up over the last four years and I have great sympathy with the plight of the residents whom I’ve met whose lives have been adversely affected.”

The legislation around unauthorised encampments is complex and there are requirements that must be met in order for local authorities and police to take action to move them on.

The act of trespass in relation to encampments currently remains a civil matter. When an unauthorised encampment is set up in Surrey, the occupiers are often served with orders by the police or local authority and then move on to another location nearby where the process begins again.

The PCC added: “There have been reports that the government will be seeking a change in law to make trespass in relation to unauthorised encampments a criminal offence. I would fully support this and submitted in my response to the government consultation that the legislation should be as simple and comprehensive as possible.

“I believe this change in law, coupled with the introduction of transit sites, is urgently needed to break the cycle of repeated unauthorised traveller encampments that continue to affect our local communities.”