A really important area of focus for the Office of the Police and Crime Commissioner is steering those who find themselves within the criminal justice system away from reoffending.

The PCC’s view is that if the right services are offered to offenders who have been to prison or are serving community sentences then we can help stop them drifting back into crime meaning the communities in which they live will also benefit.

Around £250,000 was set aside from our Community Safety Fund to finance projects in this area and good progress is being made in a number of areas through schemes we are helping fund across Surrey.

A new Criminal Justice post has been created in the office who has been busy producing a reducing reoffending strategy and identifying a number of initiatives in areas such as housing and accommodation and what is known as ‘Through the Gate’ programmes.

Often people on probation have complex needs created by issues such as drug and alcohol addiction and mental health issues. The biggest problems are faced by those released from prison with nowhere to live.

Around 50 Surrey residents per month are released from prison back into society and around one in five of those have no permanent place to live. This increases to one in two people when you are talking about prolific offenders.

A lack of stable accommodation causes obvious difficulties such as finding work and access to benefits and services and significantly reduces the chances of individuals avoiding the path back to reoffending and making a fresh start.

Over the last year we have been working with two organisations – the Amber Foundation and Transform – to provide funding for accommodation in Surrey.

The Amber Foundation helps young people aged from 17 to 30 by providing a temporary shared home with a community of around 30 others. Staff there deliver a programme of training and activities based around accommodation, employment and health and wellbeing. The PCC’s office has provided funding for three beds at one of their centres based in Surrey.

We have also provided funding to Transform Housing which has allowed them to provide four beds at one Surrey property with a further four due at another house later this summer bringing their offer of supported accommodation for ex-offenders from 25 beds to 33.

In addition, further grants have been issued to fund outreach work with the York Road Project in Woking and Elmbridge Rentstart which support homeless people in getting their lives back on track.

“Through the Gate” services are where prisoners are supported in the final stages of their sentence through projects which continue following their release.

The PCC’s office has been working with the The Kent, Surrey and Sussex Community Rehabilitation Company (KSS CRC) to deliver a mentoring service based at Highdown Prison near Banstead.

This scheme is working with people in the last 12 weeks of their sentence to assist them with issues such as housing, drink or drug abuse, debt or relationship issues and employment.

We have also been supporting a pilot scheme in Surrey known as ‘Behind Bras’ which is helping women released on licence from prison attend college and learn new skills in the fashion industry where they will ultimately be offered work placements. Funding from the OPCC is currently assisting five women in Surrey through this programme. 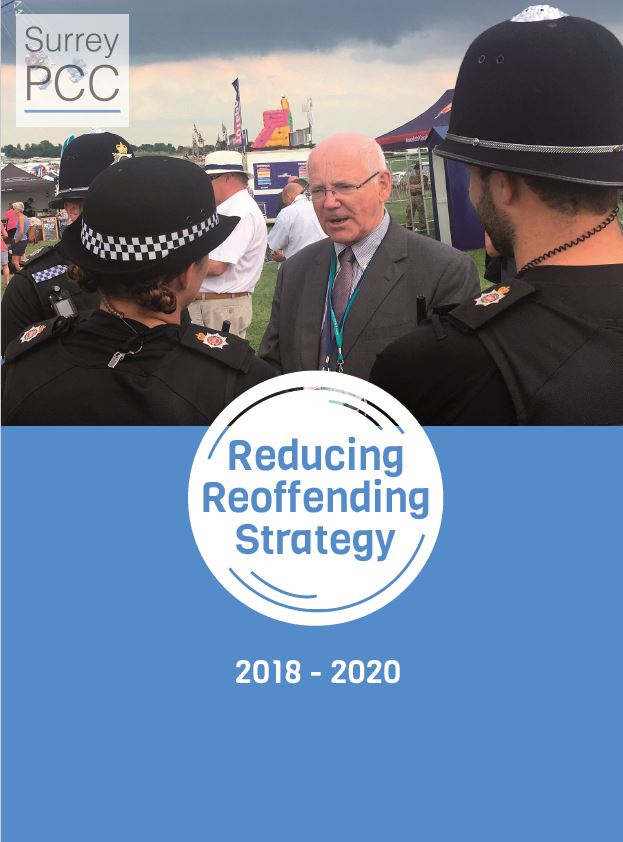 The PCC’s office has also supported a number of further projects during the last year aimed at helping reduce reoffending. These include grants given to the charity Women in Prison for a women-only counselling service in Woking and funding for a case worker post to work with women in the community, avoiding prison sentences.

We have also provided funding to Voluntary Action Reigate and Banstead (VARB) who help former offenders find voluntary work by engaging with local businesses and organisations.

A new ‘One Stop Shop’ service we have helped fund in Guildford takes place once a month. This project provides a range of support services under one roof to help those on probation from returning to a life of crime.

Reducing reoffending will remain a focus for the office in 2018/19 and there are other exciting projects in the pipeline including a deferred prosecution scheme called ‘Checkpoint’ for low-level offending.