This forms a key part of the role of your Commissioner Lisa Townsend in holding the Chief Constable to account, and supporting improvements to the service that residents receive.

Performance and Accountability meetings are held with the Chief Constable of Surrey Police every 12 weeks. They include an updated Performance report with the latest information from Surrey Police, and additional reports on agreed themes.

The next public Performance and Accountability meeting will be live streamed via Facebook on Monday, 16 May. The meeting will include an update on Surrey Police performance, featuring specific updates on road safety, engagement with children and young people and support for victims of crime. Papers for this meeting are available below:

Inspection reports on Surrey Police performance are also produced by Her Majesty’s Inspectorate of Constabulary, Fire and Rescue Services (HMICFRS). The HMICFRS report on overall Force performance is referred to as the ‘PEEL report’ as it measures Police Effectiveness, Efficiency and Legitimacy.

You can see the Commissioner’s response to more regular specific reports by HMICFRS here. 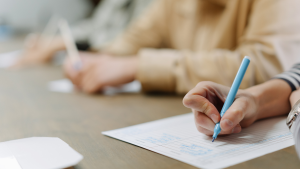 These meetings are complemented by Resource and Efficiency meetings that are held in private between your Commissioner and Surrey Police. More details on these meetings will be provided in advance on this page.

Additional information will be provided to match The Government’s National Priorities for Policing (below). These complement the priorities set out in the Commissioner’s Police and Crime Plan: