The Surrey Police website provides a wide range of information about policing in Surrey:
http://www.surrey.police.uk/

In simple terms, the challenges we face as a service over the next 3 years involve increases in demand and complexity across almost every area of our business. Following year on year savings we are doing more with less, but with the added challenge that the ‘more’ is increasingly complex, creating additional demands of its own.

The decisions concerning where to focus our resource and attention are difficult, with increasing departure from traditional police activity towards ‘hidden’ crimes including modern slavery and child sexual exploitation.  The public whom we serve are largely unaware of these developing crime types. They rightfully have high expectations of us and we recognise that some of their concerns do not always align to the threat and harm assessments we make about deployment. We ignore the will of the public at our peril. Whilst we must not shy away from using our professional judgement to make difficult choices concerning how we conduct our business, listening to and maintaining the confidence of our communities is paramount in securing their support for our endeavours.

Quite rightly we have increasingly sought to protect the most vulnerable in our communities from harm. Our ability to identify risk and vulnerability has improved and developed immeasurably over the last decade in terms of our assessment, decision making and information management. Of course, once vulnerability has been identified it has to be acted upon. Initial calls, incidents, investigations and ultimately criminal justice processes are taking longer whilst we strive to identify and support those at the most risk or with additional needs. The demands upon our teams are increasing as a result in terms of workloads, but also in the ever-increasing need for specialist skills.

Advances in technology present us with opportunities for innovation and efficiency, but also challenges, creating unparalleled pressures on key areas of our activity. The digital world has expanded beyond recognition with people living more of their lives in a virtual environment, within which we are increasingly expected to engage and police. This includes communicating on social media, combatting cyber enabled crimes and reviewing masses of digital evidence as the norm, rather than the exception. ICT and associated specialists are expensive, which is a challenge when we require industry standard resources, but with a fraction of their budget.

All of the above is intrinsically linked to our greatest strength – our people. To create a future-fit workforce, we must recruit and retain the right people with the right skills. Moreover, true commitment to organisational learning is essential for us to evolve in an informed manner, better than we previously were, on the back of lessons learnt. We must also honour our commitment to our people in terms of their personal wellbeing. We are asking them to work harder and to manage larger workloads that consist of increasingly complex, high-harm offences that can be emotionally difficult to be involved in.

The Surrey Police area is coterminous with the County of Surrey, with a population of 1.19m. In addition to this resident population, however, Surrey is home to a variety of businesses, from local to global organisations, major transport infrastructure (including the M25, M3 and M23, and both Gatwick and Heathrow airports on its border), four major hospitals, two universities, and significant elements of critical national infrastructure. Bordered by Sussex Police, Hampshire Constabulary, Thames Valley Police, the Metropolitan Police Service, and Kent Police, the force faces various challenges in terms of travelling and regional criminality.

Policing is an increasingly complex environment in which to deliver services with changes in technology increasing demand, shifting the way that the public wish to engage with the police, changing the types and scope of criminality affecting local people, and impacting the way that police must respond. Working to the force’s Plan on a Page, which sets out Surrey Police’s Vision, Mission, and Commitments to staff, Surrey Police places local policing at its heart, with dedicated neighbourhood teams, but also works collaboratively, regionally and nationally with other forces and partner agencies to deliver its services and to achieve its vision of making Surrey the safest it can be. 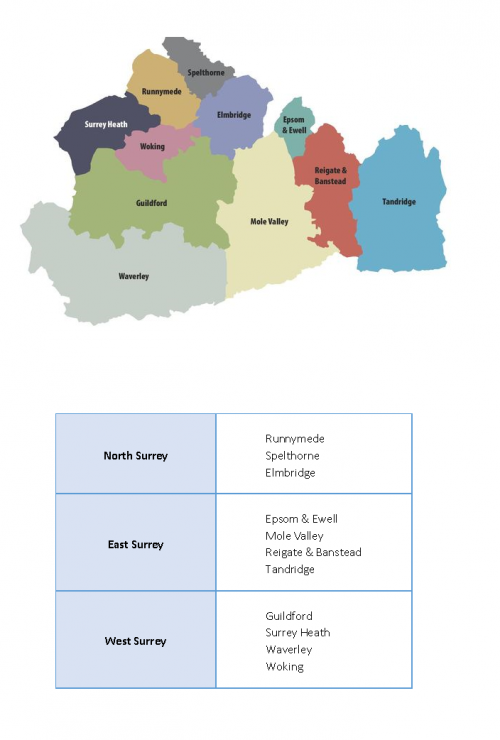 The following structure gives a brief and, in many cases, simplified description of the work of departments and teams within Surrey Police, and those that form part of collaborated arrangements with other forces or agencies. All of the teams and departments will be interdependent upon others, and will work closely with colleagues; sometimes sharing expertise or staff, and often working together to solve a problem from different approaches. For example, a local neighbourhood issue may be identified and owned by the local Neighbourhood Specialist Officer, but they will often involve the local CID, NPT and force wide teams as well as partner agencies to work together to solve the problem. Similarly an organised crime case will be led by the Serious and Organised Crime Unit but will often depend on expertise from teams such as local officers and PCSOs, Intelligence, Surveillance, and Public Order or Firearms units.

A High Harm Perpetrator Unit responsible for the management (whether via diversion or prosecution) of those people who cause the most harm, including registered sex offenders.

A Neighbourhood Policing Team responsible for response to calls for service, investigation of volume crime (PIP1 crime), and proactive activity. Each rota is managed across the division by an Inspector, but teams are based locally (one per borough or district) and led by Sergeants.

A Safeguarding Investigation Unit responsible for the safeguarding of vulnerable people and the investigation of, and partnership work to prevent or reduce, crimes of child abuse, more serious domestic abuse, and reports of missing people across the division.

A number of Specialist Neighbourhood Teams (one per borough or district) responsible for reducing crime, disorder and antisocial behaviour by working with partners and taking a problem-solving approach to tackle local issues. There is one team per borough or district, led by the local Borough Commander (Inspector) and formed of Sergeants, Constables and PCSOs.

The Complex Abuse Unit responsible for the investigation of more complicated allegations of abuse that may relate to an organisation or a prolific historic offender.

The Paedophile Online Investigation Team responsible for the investigation of abuse committed or facilitated online.

The Surrey High Intensity Partnership Programme responsible for working with partners to identify, and put multi-agency plans in place for, people experiencing mental health crises who cause the greatest demand on police and partner organisations.

The Sexual Offences Investigation Team responsible for the investigation of allegations of rape.

The Contact Centre which handles all telephone calls to 101 and 999 and general e-mail enquiries.

The Force Control Room which deploys officers and staff to immediate and priority incidents.

The Occurrence Management Unit which manages the allocation and finalisation of reports of crime.

Information and Communications Technology Department, responsible for the procurement, installation and management of all ICT, from computer systems to Airwave radios and mobile data terminals.

People Services responsible for all aspects of human resource management, from recruitment and retention to training and development, occupational health and wellbeing.

The Emergency Planning Team, responsible for liaison with partners as per the Civil Contingencies Act, via the Local Resilience Forum (LRF), to ensure that Surrey Police and the wider LRF are prepared for emergencies (from flooding, to disease outbreak to loss of critical national infrastructure), and have plans in place and tested for these eventualities.

The Firearms and Explosive Licensing Unit responsible for issuing, reviewing and revoking licenses for firearms, shotguns and explosives.

The Operational Planning Team, responsible for planning all major operations, including logistics, resourcing, briefing and support infrastructure, from regular events such as the Epsom Derby to single events such as the recent international meeting of Hell’s Angels, or large scale mobilisations such as planning for the UK exiting the EU.

The Roads Policing Unit responsible for patrol and enforcement activity on the Strategic Road Network, as well as serious collision investigation on all roads.

The Safer Camera Partnership, responsible for deployment of, and prosecutions from, both static and mobile speed cameras.

The Search Team, responsible for training and accreditation of officers to conduct counterterrorism and missing people searches.

The Tactical Firearms Unit, responsible for training and deployment of operational officers, tactical advisors and commanders across a range of firearms roles.

Digital Forensics Team managing the forensic analysis and evidence capture from digital items (whether computers, smartphones, tablets or any item connected to the internet).

Intelligence Units, at both a force and local level, managing the collation, assessment, dissemination and development of intelligence.

Regional collaborated units to which Surrey Police contributes resources, and upon which the force relies for support, include the South East Region Organised Crime Unit, Counter Terrorism Policing South East, Counter Terrorism Specialist Firearms Officers Hubs, and the South East Regional Integrated Policing programme. In addition, a number of functions, such as public order refresher training, will be delivered regionally by a single force, while regular regional meetings will take place to coordinate cross-boundary activity.

In addition to the units above based at either borough/district, divisional, force, bi-force or regional level, many officers will have secondary skills that could be called upon through mutual aid arrangements by any force in the UK, and which the force is under an obligation to maintain. These include skills such as PSU, Search, Firearms, and CBRN response. This list is far from exhaustive, and officers may be seconded in support of other forces or government departments for short-term responses to incidents (e.g. a single protest or sporting event) or for longer-term pieces of work (e.g. the Salisbury poisonings).

Surrey Police look at a range of performance measures in the form of a scorecard.  The latest scorecard can be viewed here  (Link).    Information candidates may be particularly interested in are crime levels, outcomes of crimes, call handling and inspection findings.  These are shown below.

[1]Source:  Office for National Statistics.  https://www.ons.gov.uk/peoplepopulationandcommunity/crimeandjustice/bulletins/crimeinenglandandwales/yearendingmarch2020 This table shows police recorded crime in Surrey.   This will not be a true reflection of actual crime levels as not all crime is reported to police.  There has been a drive nationally and locally to encourage victims of traditionally under-reported ‘high harm’ crimes (domestic violence, sexual offences, child abuse and hate crime) to report to police.  Police activity also affects some crime types e.g. drug offences re often recorded as a result of police operations.   These figures provide a good indicator of police workload.   Changes over time can also be reflective of changes to counting rules.

[2] Includes homicide, violence with injury and violence without injury (including domestic violence) and from 2917/18 stalking and harassment

[3] Total notifiable offences, aka ‘crimes’, are the offences that the Home Office requires police forces to report as part of the national offence statistics.  Excludes fraud offences, which are generally recorded by Action Fraud and not part of the police recorded data.

[4] Source: www.gov.uk/government/statistics/police-recorded-crime-open-data-tables Once a crime is recorded there are 22 different ways police can record an outcome, for example charged, cautioned, suspect identified but evidential difficulties, no suspect identified, no outcome to date.  This % shows those cases where there has been a suspect identified and police action taken e.g. charge, caution, fixed penalty notice.

[5] Includes homicide, violence with injury and violence without injury (including domestic violence) and from 2917/18 stalking and harassment

[6] Total notifiable offences, aka ‘crimes’, are the offences that the Home Office requires police forces to report as part of the national offence statistics.  Excludes fraud offences, which are generally recorded by Action Fraud and not part of the police recorded data.

The chart below shows the percentage of 999 calls answered within 10 seconds.

The chart below shows the average monthly times for 101 calls

Her Majesty’s Inspectorate of Constabulary and Fire & Rescue Service (HMICFRS) inspect police forces regularly.  Grades are given in 3 categories annual for each Police force: effectiveness, efficiency, legitimacy.  The grades for Surrey Police over the last few years are as follows:

The full reports for these findings, as well as other inspection reports for Surrey Police can be found HERE.