Police and Crime Commissioner for Surrey Lisa Townsend said Insulate Britain protesters should ‘consider their future’ as new measures to prevent motorway protests could land activists with two years in prison or an unlimited fine.

A fresh court injunction was granted to Highways England this weekend, after new protests by the climate activists blocked sections of the M1, M4 and M25 in the tenth day of actions held in three weeks.

It comes as protesters have today been removed by the Metropolitan Police and partners from London’s Wandsworth Bridge and the Blackwall Tunnel.

Threatening that new offences will be treated as ‘contempt of court’, the injunction means that individuals staging protests on key routes may face prison time for their actions.

In Surrey, four days of protests on the M25 in September led to the arrest of 130 people. The Commissioner praised the swift actions of Surrey Police and has called on the Crown Prosecution Service (CPS) to join police forces in a firm response.

The new order covers motorways and A roads in and around London and enables police forces to submit evidence direct to Highways England in order to assist with the injunction process carried out by the courts.

It acts as a deterrent, by including more routes and further banning protesters who damage or attach themselves to road surfaces. 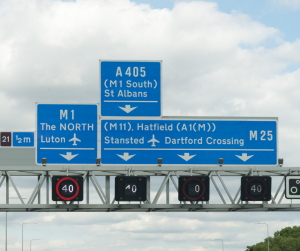 Commissioner Lisa Townsend said: “The disruption caused by Insulate Britain protesters continues to place road users and police officers in danger. It is pulling the resources of the police and other services away from individuals who need their help. This is not just about people being late to work; it could be the difference between whether police officers or other emergency responders are on the scene to save someone’s life.

“The public deserve to see coordinated action through the Justice System that is proportionate to the seriousness of these offences. I am pleased that this updated order includes providing more support for Surrey Police and other forces to work with Highways England and the courts to ensure that action is taken.

“My message to Insulate Britain protesters is that they should think very, very carefully about the impact that these actions will have on their future, and what a serious penalty or even jail time could mean for themselves and the people in their lives.”