It is the Police and Crime Commissioner’s responsibility to set the level of council tax you pay towards policing, known as the precept.

For the financial year 2021/22 – The Commissioner’s proposal for a 5.5% increase was accepted by Surrey’s Police and Crime Panel meaning the precept has been set at £285.57 for a Band D property.

This amounts to around an extra £15 on last year’s figure. 4,464 people took part in our public consultation survey which asked whether residents would support the proposed rise to add ten further officers and 67 operational staff. Of those who responded, 49% were in support of the increase.

The precept rise accepted will allow the Force to invest in 77 additional officer and operational staff roles during this time, in addition to 73 extra officers that will be paid for by central government.

Learn more using the links below: 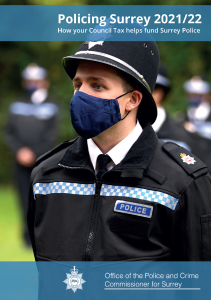 Click the boxes below to view council tax leaflets from previous years: