The Commissioner’s suggested 3.5% increase for the policing element of the council tax will go ahead after a unanimous vote from the county’s Police and Crime Panel during a meeting at County Hall in Reigate this morning.

One of the PCC’s key responsibilities is to set the overall budget for Surrey Police including determining the level of council tax raised for policing in the county, known as the precept, which funds the Force together with a grant from central government.

The PCC said while policing is facing a significant rise in costs, the precept increase will mean Surrey Police is able to maintain policing levels across the county over the next year.

The policing element of an average Band D Council Tax bill will now be set at £295.57 – an increase of £10 a year or 83p a week. It equates to around a 3.5% increase across all council tax bands.

The PCC’s office carried out a public consultation throughout December and early January in which around 2,700 respondents answered a survey with their views. Residents were given three options – whether they would be prepared to pay the suggested 83p extra a month on their council tax bill – or a higher or lower figure.

Around 60% of respondents said they would support the 83p increase or a higher rise. Just under 40% voted for a lower figure.

Combined with Surrey Police’s share of extra officers from the government’s uplift programme, last year’s increase in the policing element of the council tax meant the Force was able to add 150 officers and operational staff to their ranks. In 2022/23, the government’s uplift programme will mean the Force can recruit around 98 more police officers.

PCC Lisa Townsend said: “The public have told me loud and clear that they want to see more police officers in our communities tackling those issues that matter most to them. 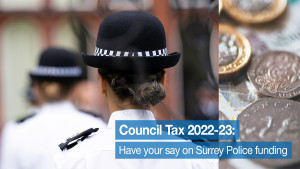 “This increase will mean Surrey Police are able to sustain their current policing levels and give the right support to those extra officers we are bringing in as part of the government’s uplift programme.

“It is always difficult to ask the public for more money, especially in the current financial climate with the cost of living increasing for us all so I haven’t taken this decision lightly.

“But I wanted to ensure we didn’t take a backwards step in the service we provide to our residents and risk the hard work that has gone into increasing police numbers in recent years being undone.

“I launched my Police and Crime Plan in December which was firmly based on the priorities that residents told me they felt were the most important such as the safety of our local roads, tackling anti-social behaviour, combatting drugs and ensuring the safety of women and girls in our communities.

“In order to deliver on those priorities and maintain that vital role in keeping our communities safe during these difficult times, I believe we must ensure we have the right resources in place. The budget for my office was also discussed at the meeting and the panel did recommend that I review it but I am pleased that the precept was unanimously approved.

“I would like to thank everyone who took the time to fill in our survey and give us their views – we received nearly 1,500 comments from people with a range of opinions on policing in this county.

“I am determined during my time as Commissioner to provide the Surrey public with the best service we can and to support our policing teams across the county in the brilliant job they do protecting our residents.”