I am asking residents to consider two options for the policing element of this year’s council tax precept for 2020/21:

For more information, please read my message below and take a minute to fill in our brief survey HERE

* The government has announced that PCCs may increase this amount by up to 3.83% for the year 2020/1. Where stated, the option for 5%, presented before this announcement, should be considered to represent this new figure. Read our FAQ HERE.

This year has been particularly difficult as by now we would have ordinarily received the annual government settlement which outlines how much central grant Surrey Police will get along with the maximum level of council tax I am allowed to raise as PCC.

The unusual timing of the recent general election has meant that settlement, which is usually announced before Christmas, has been delayed until some point in late January.

With a proposed budget needing to be finalised in early February, this has unfortunately restricted our ability to financially plan together with Surrey Police whilst also meaning the window for seeking public feedback is much shorter than usual.

However, this year, I believe we have a good story to tell following a long period of cuts to police services across the country. As we enter a new decade, the future is bright for policing in Surrey with more officers being put back into our communities which I know the county’s residents want to see.

Of those who took part in our consultation last year, around three quarters supported my proposal for an extra 10% on the policing part of their council tax bill in exchange for 79 additional officers and operational staff as well as preventing the loss of 25 other posts. I am pleased to say those extra recruits will all be in post or doing their training by May 2020.

I have met many of them over the last year and have been struck by their enthusiasm and appetite to get on with the job. They are very welcome additions to the Surrey police team who I have no doubt will do the county proud.

Added to this, it was announced last October that Surrey will receive central funding for an extra 78 police officers over the next year as part of the government’s three year programme to increase police officer numbers nationally by 20,000. Further uplifts have been promised in years two and three.

This has provided a really solid platform for the detailed conversations I have had with the Chief Constable on his requirements over the next year to complement and support those officers and staff we’ve already recruited and those who will be joining during 2020/21.

A 5% increase in police council tax would allow Surrey Police to invest in:

We have crunched the numbers but would not like to put an exact figure on how many extra officers and staff we could get in until we know what the government settlement looks like.

A 2% increase in line with inflation would not allow any increase in resources but would allow the force to maintain a steady course while continuing the police officer training, keep recruiting officers to replace those retiring or leaving and bringing in the extra 78 centrally funded officers.

A 5% rise would equate to around a £13 a year rise for an average Band D property while 2% would mean an extra £5 on a Band D annual bill.

These are the two options I would like to hear the views of Surrey residents on which I believe would strike a fair balance between providing an efficient policing service and the burden on the public.

Whilst my final decision will inevitably hinge on the awaited government settlement, it is really important to me to get the views and opinions of the Surrey public. I would ask everyone to take a minute to fill out our brief questionnaire and let me know their views which can help me with this important task.

Our short online survey, which closes on February 6, can be found HERE

Together with the Surrey Police Chief Officer Team and local Borough Commanders, I will also be carrying out a series of public engagement events in every borough in the county in the next five weeks to hear people’s views in person. Please do come along if you can – you can sign up to your nearest event by clicking here 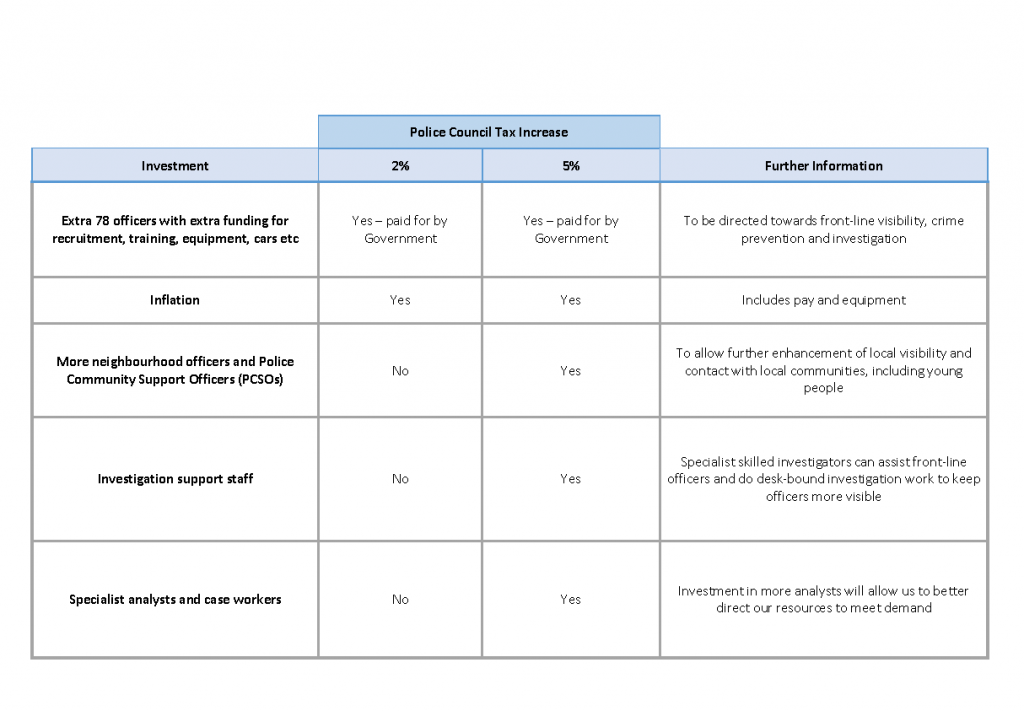 * The government has announced that PCCs may increase the policing element of the local Council Tax amount by up to 3.83% for the year 2020/1. Where stated, the option for 5%, presented before this announcement, should be considered to represent this new figure. Read our FAQ HERE.