The Police and Crime Commissioner for Surrey David Munro has published his Annual Report for 2018/19 which looks back at his third year in office.

The report reflects on some of the key announcements from the last 12 months and focuses on the progress made by Surrey Police against the six objectives in the PCC’s Police and Crime Plan.

It also explores how funding has been allocated to commission services through the PCC’s Victims and Community Safety Funds and looks ahead to future challenges for policing in the county.

PCC David Munro said: “It has been a year of change but one that I believe has provided a really solid base for a bright future ahead for Surrey Police.

“In the last 12 months I have appointed a new Chief Constable, secured a site for a new headquarters for the Force and have been able to add extra officers and staff to the establishment for the first time in a decade following the precept increase.

“The high levels of confidence and satisfaction the public have in Surrey Police have been maintained whilst real progress has been made in areas such as the response to the 101 number and successfully tackling a spike in burglaries across the county.

“However there is still much work to be done and the report signposts a number of areas for focus over the next year. 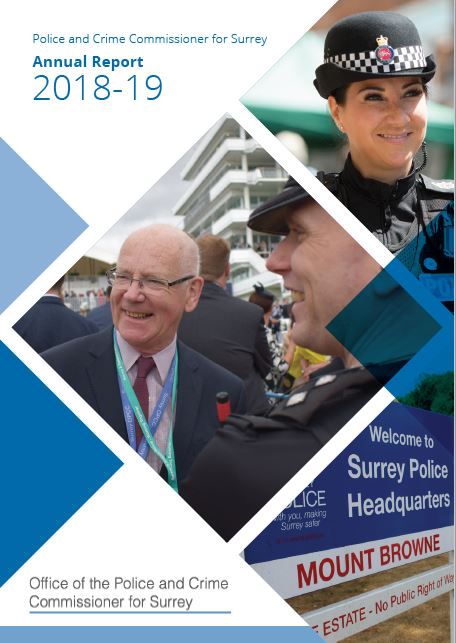 “My continued thanks go to all those who work for Surrey Police for their professionalism, dedication and achievements over the last year, often in challenging circumstances.”